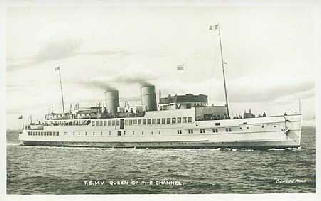 Queen of the Channel 1

The forward funnel is a dummy used as a deck chair store. She carried 1600 passengers.

She was sunk in May 1940 on a Dunkirk evacuation mission.

Queen of the Channel 2

Built in 1949 to replace the one lost at Dunkirk. The newcomer was larger than her predecessor and was typical of the Denny built motor ships for the General Steam Navigation Co Ltd and its subsidiary, the New Medway Steam Packet Co. The new Queen of the Channel sailed from Ramsgate in her first season and took trips to the French coast (non landing) or the Kent coast calling at Dover then cruising to off Dungeness. She could accommodate 1500 passengers in comfort and cruised at around 19 knots. She later took on the London to Clacton service from Tower Pier, calling at Southend en route.

Some times, when sailing off Margate, she would deliver supplies to the lightships in the Thames. After the government relaxed the restrictions on landing in France, Queen of the Channel sailed on "no passport" trips from Ramsgate to Boulogne and Calais in addition to the Clacton run. She continued sailing for the GSN, adding Deal to her ports of call, until they ceased their Thames excursion services at the end of the 1966 season. After a period being laid up in the River Medway, Queen of the Channel was sold in 1968 for use in the Mediterranean and renamed Oia.

Queen of the Channel 2 at  Boulogne 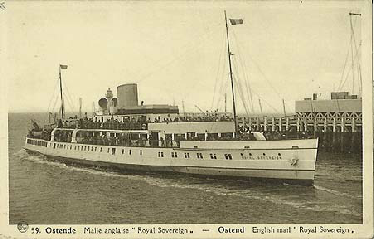 The  Royal Sovereign was built for the New Medway S P Co Denny’s and was was launched on May 28th 1937. By this time the Company had been taken over by the General Steam Navigation Co Ltd. She was reputedly to be named Continental Queen.

The Sovereign sailed from London to Bolougne and Calais and on the 'no-passport' weekend service to Ostend foe £2- 5s. During the early part of WW2  the Royal Sovereign was used for the evacuation of women and children from Essex and Kent to East Anglia.

It was also used as a troop ship between Southampton and Cherbourg. It was hit by a torpedo off the Isle of Wight, but was not damaged enough to prevent her taking part in the Dunkirk evacuation. The Admiralty later renamed her the HMS Royal Scot.

On December 9th 1940 the Royal Sovereign was sailing from the Gareloch to the South of England, and in the Bristol Channel near Barry Island, hit a mine killing the Chief Officer and started to take on water.

It did not sink immediately and this allowed a tug to come alongside and take on the survivors.

She was built in 1948 to replace her namesake sunk in the Bristol Channel. She had a covered observation lounge on the sun deck and a spacious lounge on the promenade deck. Fore & aft on the main deck were two dining rooms seating 96 & 140 persons respectively.

She ran from London to Ramsgate and called at Tilbury Southend and Margate. She did some cross channel work as well as travelling as far as Yarmouth on occasions.

Withdrawn in 1966 she became a lorry carrier named Autocarrier between Dover and Zeebrugge. Renamed Ischia she went to Naples as a ferry

During 1975 she passed to Navigazione Toscana, Livorno, for services to Portoferraio on Elba. In the 1980s she returned to Naples-Ischia servoce for Traghetti Pozzuoli SRL.

The ship was sold in late 2007 and broken up at a shipbreakers in Aliaga, Turkey. 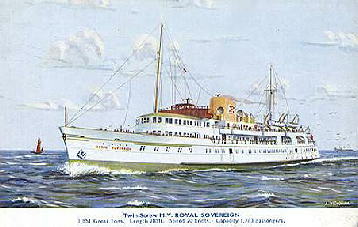 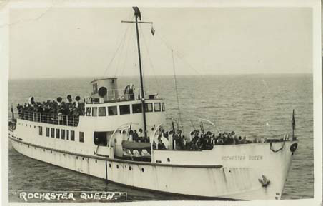 She was one of four LCG(M)(1) Class (Landing Craft gun, Medium Mark 1) conversions undertaken by the Jake Bolson Shipyard in Poole after the Second World War.

She operated on the Medway and Thames on New Medway SP Co routes until 1956 when she was sold for coastal use in Germany as the Hein Mück. In 1961 she passed to Commodore Shipping as the Commodore Queen, and used for services in the Channel Islands. She spent a further 3 years in the Channels Islands as Jersey Queen with Jersey Car Ferries before leaving to work in Nigeria.