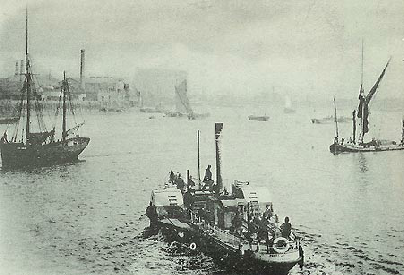 Steamboat Co. The picture shows vessel on the Thames in 1866. 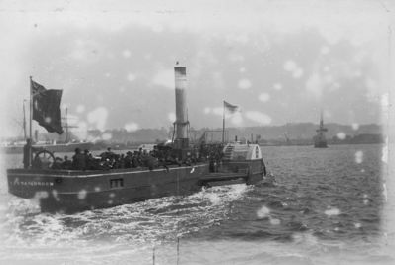 The Vesta was possibly built in 1870 by R Duncan & Co, Port Glasgow. Thought to have been built for the new Gareloch service from Greenock, but sold to Keith & Campbell in 1871 after the dissolution of the Greenock Company. She was sold after the 1875 season by Keith & Campbell to the London Steamboat Company with other ex-Greenock & Helensburgh vessels including Osprey and Duke of Edinburgh.

The Duke of Cambridge

Built by Hills of Port Glasgow in 1866 for the Gareloch service from Greenock it had oscillating 2 cylinders engines. 92 tonnes gross. . It was named Argowan. She was sold in 1875 to the London Steamboat Co for use on the Thames Pictured here in 1886 at Victoria Embankment and owned by the Woolwich SP Co between 1875 and 1898 (London SB Co). 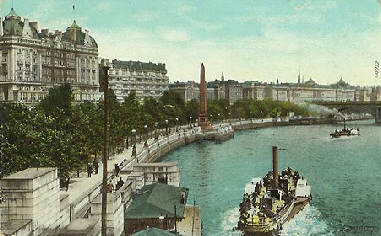 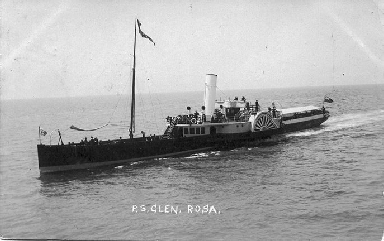 Purchased in 1881 by Thames Channel Shipping Co, becoming the London Steam­boat Co and New Victoria Steamboat Co, she was used for their Yarmouth service. In 1882 she was used on charter to Hastings and St Leonard's then in 1883 was back on Yarmouth to Harwich Service, connecting with Koh i Noorfrom London. In 1888 she worked from London to Clacton and back in a day doing 21 knots. Through­out her history she was plagued by me­chanical trouble and became known as the "late boat".

In 1898 she was sold to PA Campbell to work on South Coast and was based in Brighton from 1903 to 1912. It went to Bristol in 1914 for use on the Cardiff Service until WW1. In 1917 she was converted for mine-sweeping in Portland and the Thames. She returned to Bristol post war and was scrapped in 1921. 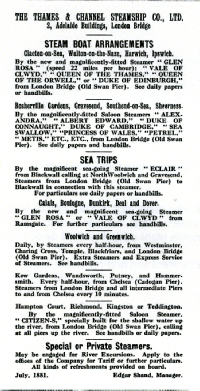 After they were set up their first move was to purchase the paddler Lord of the Isles. Although 12 years old, this vessel had been operated on the prestige Glasgow - In-veraray route in Scotland and was extremely well appointed, with spacious fore and aft saloons on the main deck.

It set new standards for the Thames and sent the As­sociation and its competitor on the Clacton route into an intense frenzy of vessel purchasing. The Association introduced the enormous PS Koh-i-Noor in 1892 and a sister ship, PS Royal Sovereign a year later. In 1894 PS La Marguerite, the second largest coastal paddler ever operated in the UK and a great favourite on the Kent coast and cross-channel routes to France joined the fleet. 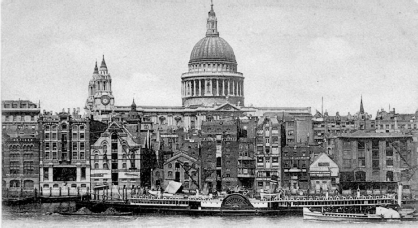 Lord of the Isles

She was built in 1877 by Henderson's for the Glasgow Inveraray Steam Boat Com­pany and had a simple 2 cylinder engine.

She was sold after the 1890 season to owners who were part of the Victoria Steam­boat Association to rival the Clacton Belle. Despite her age, her luxury was regarded as a revelation on the Thames. Telescopic funnels were added and aft deck saloon extended to the full width of the hull.

In 1897 she was sold to Planet Steamers for their Kent run and renamed Jupiter. In 1900 she was used on the South Coast at Brighton and in 1902 sold to Dawson Reid of Glasgow and renamed Lady of the Isles. Stored out of action in 1904 she was then sold for scrapping in 1905. 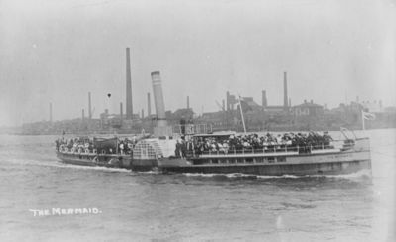 Mermaid Was built in 1891 by Samuda Bros in Poplar for the Victoria Steamboat Association. She was used on London to Gravesend and later Southend routes. In 1916 She was sold as a Number ferry and then in 1922 went to Ireland for the Limerick to Kilrush service and then in 1924 for Belfast to Bangor. In 1927 she was scrapped in Preston. 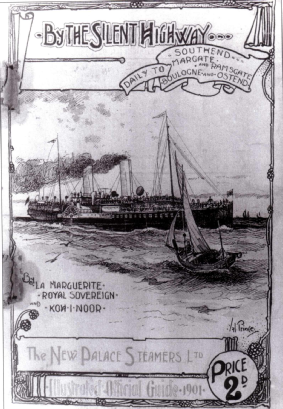 A poster for New Palace Steamers who foreclosed on Victoria Steam Boat Asso­ciation. 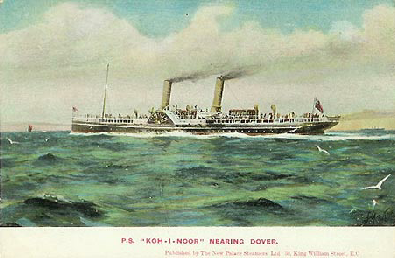 Koh i Noor    Built in 1892 by Fairfields, 884GRT, she was damaged off Pembroke sailing down from Scotland when in fog she hit rocks and badly damaged her bow. She returned to her builder for repairs. She was built entirely of steel. It was the first new boat for the Victoria Steamboat Association operated in mort­gage.

Built to rival the threat of the new Belle steamers, she cost £50,000, and had a tele­scopic mast, 2 decks with a 1st class dining salon. It was fully fitted with electric light­ing, post office and book and fruit stalls.

It set new standards of accommodation and was used on the Harwich run, being one of the most popular boats on the Thames.

For a time she was used as a husband boat from Tilbury to Margate and after 1903 ran to Dover. In 1894 Fairfield's foreclosed on the Victoria Steamboat Company and set up New Palace Steamers taking the boat back into their ownership. In early 1914 she was used on the Kent Coast service.

The outbreak of the First World War, at the height of the 1914 season, brought a premature reduction in traffic. Koh-i-Noor was sent to Scotland for refitting, but work never started and she remained laid-up throughout the hostilities and was never re­activated. She was scrapped at Morecombe in 1918.

The New Palace Steamers chartered second hand tonnage in PS La Belgique, ex "Paris", to develop the cross-channel business between Tilbury and Ostend, but just for one season in 1897. As she was not fast enough she returned to MacBrayne in Glasgow. In 1905 she was wrecked. 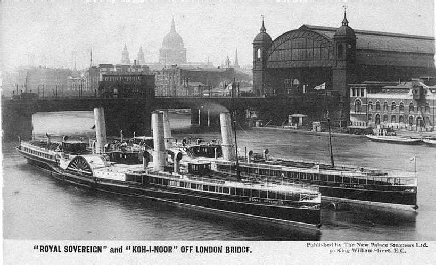 Built by Fairfields of Glasgow in 1893 with compound

and used on their North Kent run to rival the Belle

In 1894 she reverted back to the ownership of Fairfields

under New Palace Steamers. In 1909 new boilers were

During WW1 she was laid up, then sold on to A W

remained on the North Kent run. In 1929 she was sold