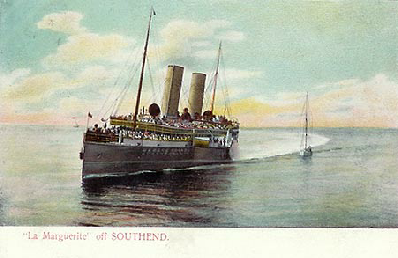 La Marguerite was built in 1894 by Fairfields of Govern. She had compound diago­nal engines. 1554GRT. Built for the Palace Steamers subsidiary of the Victoria Steamboat Association. She was the biggest Thames steamer of the time and used on the French and Belgium routes but was found expensive to run. She was the first boat to do the Tilbury to Boulogne return run in a day. The Thames Conservancy ruled she was too big for the London part of the Thames although she did travel to Greenwich a few times.

Unsurprisingly, losses were incurred and the largest and most expensive vessel, La Marguerite, despite her popularity on the French run, was withdrawn after the 1903 season, She was transferred to Fairfield's other subsidiary the North Wales and Liv­erpool SS Co for Llandudno, Meni Strait, Liverpool service until 1925. During that time she had a brief spell on the Liverpool Isle of Man route. She was a financial success in Liverpool because of lower crew wages and the lower cost of coal. In WW1 she was used as a troop ship because of her speed, clocking up 52,000 miles and carrying 360,000 troops. 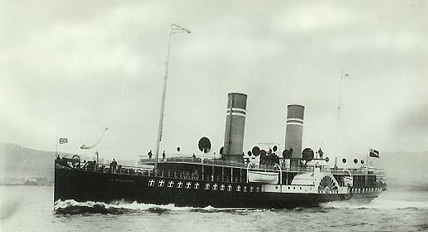 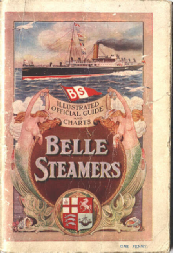 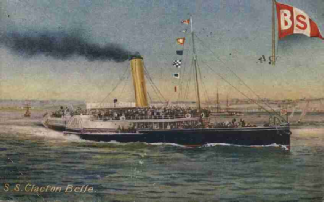 The first boat the Company ordered to serve Clacton was the PS Clacton from the yard of J Scott at Kinghorn, Fife and entered service in May 1888, leaving London six mornings a week for Clacton, returning the same evening. 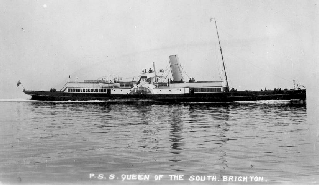 The Clacton Company took delivery of two more fine steamers from Denny's Dum­barton yard, the Woolwich Belle (1891) and the London Belle (1893). They were or­dered because services were expanded north from Clacton to Ipswich and the River Orwell. This was a period of intense competition, with the Victoria Steamboat Asso­ciation building ever larger and more luxurious vessels, and so the Clacton Com­pany was obliged to introduce suitable tonnage to maintain its position. Usage 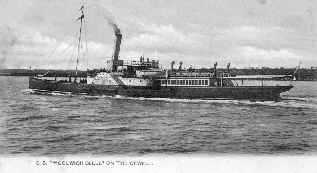 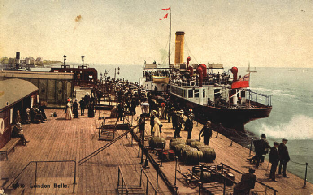 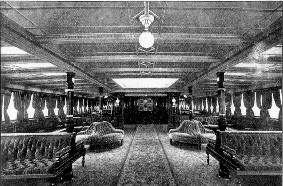 London Belle  Built in 1893 by Denny of Dumbarton. 738GRT Used on the London, Clacton and Harwich service to rival the Koh i Noor. She had the notoriety of being the only Belle Steamer with a fatality, a man over­board. She had the largest draught of any Belle Steamer but was prone to running aground at Clacton. Could run at a speed of 19 knots.

In 1916 during WW1 she served in Harwich and Liverpool until in 1919 she was used as a hospital carrier on the White Sea in Russia. In 1920 she resumed service until 1929 when she was scrapped.

First Class salon of the London Belle. The furniture was mahogany and finished in plush velvet. The ceiling skylight was of cathedral glass. 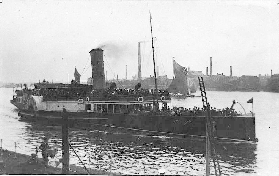 Built by Denny of Dumbarton in 1896. An order was placed for PS Southend Belle, to be on station for 1896, by which time the Clacton Company had reconstituted itself as Belle Steamers Ltd, to provide a more suitable capital base from which to see off the financially troubled Victoria Steamboat Association.

The company was wound up at the end of 1897 and a new company, The Coast Development Company was formed, with interests outside the vessels themselves. They were concerned with the further speculative development of the coastal re­sorts of East Anglia.

She was the first Belle steamer to reach Great Yarmouth in 1896. In 1897 she was used to strengthen the Margate route

In 1916 during WW1 she was transferred to Harwich and then Liverpool but in 1919 returned to service.

From 1930 until 1935 she returned to the London Clacton route. In 1936 she was sold off to General Steam Navigation and named Laguna Belle be­ing scrapped after WW2. 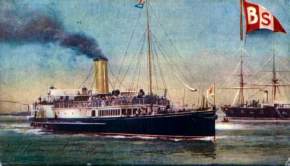 Built in 1898 by Denny of Dumbarton, she had triple compound engines. 522GRT.

Formed in January 1898, it incorporated Belle Steamers, pier and land interests in Clacton and also Walton-on-the-Naze. The latest steamer, PS Yarmouth Belle, was delivered in time for the main 1898 season, going to Great Yarmouth. Importantly, a newly extended pier at Walton, now owned by the Belle Steamers parent company, became an important steamer call and from 1900 - 1904, steamers called at the more northerly pier before the more treacherous and tide-bound Clacton pier. This gave Walton "first call" for London excursionists and a new role as the interchange point for onward passengers to the more northerly resorts.

During WW1 she was converted to a minesweeper and in 1920 released by the Ad­miralty to the liquidators.

In 1929 she was sold to New Medway SP Co renamed Queen of Southend for Chat­ham, Southend, Clacton, Walton and Felixstowe run.

In 1938 she was used for dock sightseeing trips renamed Thames Queen. In WW2 she was used to evacuate kids then later as a minesweeper in Dover. She was also one of the Dunkirk boats. In 1942 She went to Southshields and was re-equipped as an anti aircraft carrier and then used as an accommodation vessel. She was scrapped in 1948 without returning to civil duties. 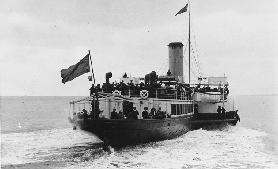 Southwold Belle was built in 1900 by Denny of Dumbarton. The company purchased land at Southwold in 1898 and set about the development of the small resort, with new roads, a large hotel, a pier and a new steamer, to be called PS Southwold Belle, which entered service in the mid-summer of 1900.

A pier was also built at Lowestoft (Claremont Pier) and opened in 1903 and a further pier at Felixstowe in 1905, She was used on the Yarmouth Service and took part in the 1902 Spithead review.

In 1911 she was sold and used as a survey tender for the Hamburg Amerika Lines renamed PS Westerland. In 1913 she was sold to a Cher­bourg company renamed Bon Voyage and used by the French Navy in WW1. In 1922 she was sold to Genoa and in 1923 was scrapped in Genoa, Italy.