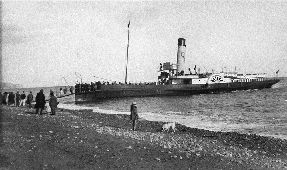 She was sold in 1913 to the Bembridge Seaview Steam Package Company, but was found too big for Bembridge Harbour and sold the same year to Cosens who did tender work for the Navy.

After WW1 she saw service at Weymouth and Swanage and then in 1925 went to Torquay.

The picture above shows how she could land without utilising a pier by nosing the beach and using planks, it is thought at Lyme Bay.

In 1932 she was sold for use on the river Thames as a Showboat. Her funnel was hinged to enable her to pass under bridges.

The conversion was to a dancehall and restaurant and Showboat ran from West­minster pier, for evening trips. 200 people dined and danced on her floodlit decks, but it lasted only one season.

The converted boat was very unstable and was initially refused a passenger cer­tificate.

It was then anchored off Margate for the next year, used for dining and cabaret and the next year taken to Shoreham until 1934 when she went to Grays for scrapping. 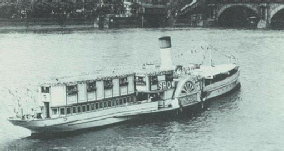 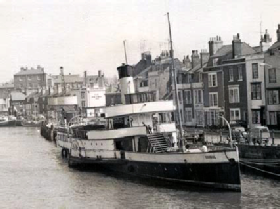 Consul Built in 1896 for the Devon Steamship Company.

In September 1963 the South Coast paddler, Consul, was chartered for a few days and ran on the Thames. She was owned by New Belle Steamers. This picture shows her at Tilbury. She was broken up at Southampton in 1968. 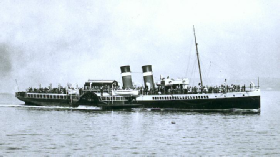 Queen of the South was built by Fairfield, Govan in 1931 as PS Jeanie Deans Jeannie Deans was a character based on the life of Helen Walker by Walter Scott. She had a 3 crank triple expansion engine. 635 tonnes.

She was converted a year later with longer funnels, new deckhouse and increased to 814 tonnes and ran on the Craigendoran service.

She was converted to oil-fired boilers in 1956/7 and radar fitted in 1960. She was withdrawn in 1964 and sold to an enthusiast group in 1965 for cruising on the Thames, renamed Queen of the South. Technical problems made the venture a failure and she ran on the Thames only in the 1966/7 seasons. She was scrapped in 1967 at Antwerp. Medway Queen was the only new paddle steamer acquired by The New Medway Steam Packet Company, being delivered by the Ailsa Shipbuilding Company in 1924. In 1938 she was converted to oil burning. She was used  on the Rochester Southend service later to Here Bay. She was the last steamer in the New Medway fleet when withdrawn in 1963. She was subsequently restored and used as a clubhouse on the Isle of Wight, but allowed to fall into disrepair. She was moved to the Medway, where restoration has made slow but steady progress ever since, with some National Lottery money made available on 2006.

The hull was rebuild in Bristol and completed in late 2013. Medway Queen was towed back home and is now moored at Gillingham Pier .

The crew of the steamers.

The lowest in rank was the deck boy counting passengers on, using a click meter.

In the very busy periods two gangways were used and the deck boys helped to place them for landing and sailing.

They were often seen on the bridge writing down the times of passing certain points down the Thames. This was an important job because the Thames lighterman could blame the paddlers for causing too much wash and they would try to claim insurance damages. The idea of time keeping was to counter their claims.

Other jobs were placing deck chairs around the decks and then collecting and stacking them after use.

A large proportion of the deck crew were men from the Western isles of Scotland. They nearly all seemed to come from Stornaway and apparently they all seemed to be named Macdonald, but were fine seamen.

They were expert at throwing heaving lines a long distance. Besides having strong arms they would load the Turks Head on the throwing end of the line with lead slugs to give them extra weight. The deck crew would eat and sleep in the foc’sle head.

They crew was about 25 men consisting of

The Joys of Travel

Weather on board could be sunny and calm or cold and wet. Whatever passengers had plenty to see on the way.

In most cases the paddlers followed the deep Thames Estuary channels but when the tide was right the skipper took them across the flats from Southend to Margate, past old wartime wrecks one of which the Richard Montgomery was an American liberty ship full of high explosives. It is still there.

The flats of course were very shallow sandbanks (which were like the Goodwin Sands) visible at low water. The Paddle Steamers had a very shallow draught. Other notable points of interest in the Thames estuary were the wartime gunforts which were easily visible from the ship.

In 1871 the Bank Holidays Act was introduced and the use of the pleasure steamer became very popular, with day trips and the long weekend.

Railway travel was still fairly expensive and this was before the advent of the motor bus. So the paddle steamer was the one way of getting out of the drudgery of the city to the more glamorous coastal resorts, like Herne Bay.

The companies built piers and help develop resorts, including those in Northern France and Belgium.

In the Edwardian period it was the working classes that were the hardy excursionists making the long journey as far as Great Yarmouth. The boats were cheaper than the railway but still a large amount compared with an artisans wage. The trips had to be saved up for.

The embarkation was the start of the holiday. Children were excited and waved at the onlookers as the boat gave its whistle and rapidly departed.

It was a real dressing up occasion, although the winds in the Thames could make it very cold.

In high summer when they reached the resorts, Margate, Ramsgate, Walton or Great Yarmouth, the holidaymakers had to find accommodation. Passengers were met by hotel and lodging house keepers touting for trade. Passenger numbers could reach a thousand a day at some resorts and police had to keep order.

Such was the demand that holiday makers sometimes could not find accommodation and slept under the pier.

Passengers very often sent postcards soon after they arrived. Often they referred to “feeding the fishes” which meant it was a rough passage and they had sea sickness.

And so each season this went on until 1914 changed every thing. Up until the war the boats were able to compete on price, if not time with the railways, and economic prosperity meant there were plenty of passengers.