The Greenwich Steam Ferry crossed the River Thames between Greenwich and the Isle of Dogs. It was unusual in that it followed an early American practice of using trolleys to run up and down to the landing stage, and the landing stage would position itself on the water's edge according to the ebb and flow of the tide.
The mechanics of this was to prove costly to build and maintain and in a few years the owners were anxious to sell it. However it did survive until the Woolwich Ferry, Blackwall Tunnel and Greenwich foot tunnel finally sealed its fate. The brief history was researched by the author and facts taken from periodicals and the press at the time.

It is documented that there have been ferries from Greenwich to the Isle of Dogs from the earliest times, certainly from the 1330's. Exactly where the sites at which different ferry services ran and how these locations varied is not well documented.

The fact that a ferry was running as early as 1330 is borne out by the fact that the people of Woolwich then petitioned parliament to suppress the Greenwich and Erith ferries which were infringing upon the Royal Ferry at Woolwich. The Greenwich ferry later passed to the Earl of Wentworth who held the manor of Stepney  which covered the Isle of Dogs.

In 1654 the ferry was sold by the Commissioners for the Estates of Delinquents as part of the Earl's possessions.

From 1636 the Warner family leased the ferry and it passed into their ownership in 1673. In 1762 the family sold the rights for 15 guineas to a group of watermen who called themselves the Potters Ferry Society, the right being granted to the watermen of Greenwich to provide “passage for men horses, beasts, and all other cattle and carriages whatsoever”.

Pepys’ diary tells of a ferry at Greenwich that was capable, in favourable conditions, of transferring horses and carriages across the Thames.

In 1812 the Ferry Society  disposed of the horse ferry and part of the landing place in the Isle of Dogs to a Mr. Mellish.

Later Mr. Cubitt, a lessee under the heirs of Mr. Mellish, obtained powers to establish an independent pier for steamboats. 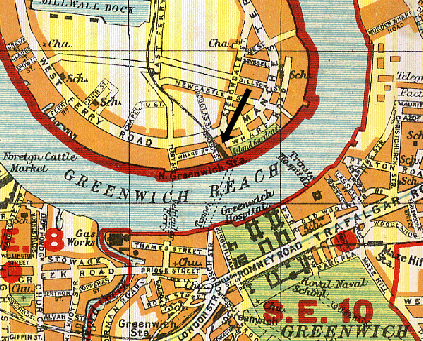 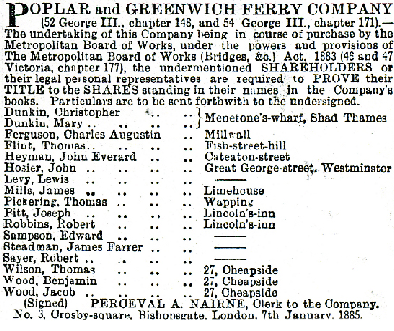 In 1796 a plan was proposed to straighten the Thames to speed up shipping.  This was rejected by Parliament as being too much of an engineering feat. It would have cut a straight line across the Isle of Dogs making that place "South of the River".

Until 1800 very few people lived on the Isle of Dogs, as it was open windswept pastureland. On the west side of the Island stood windmills, which gave the place name Millwall.

With the cutting of the docks came prosperity and the Isle became populated with industry, including a rope works, iron works and a chain works.

A ferry crossing was important not only for Greenwich but also the southern part of the Isle of Dogs. In 1812-15, two major roads were built from the docks to the ferry. These became the East Ferry and West Ferry roads and they speeded up the development of the whole Isle of Dogs.

At Greenwich the difference in high and low tides was 21 feet at this time, it is 24ft today.

In 1812 an Act of Parliament was passed creating a statutory ferry for horses and vehicles and it is around this time that Horseferry Road (now Place) first appears on maps. The end of Horseferry Rd must have run directly onto the sandy foreshore so that regardless of the state of the tide a horse and carriage could be driven onto the ferry boat. The Horseferry continued to operate from this site until the Metropolitan Board of Works Act of 1883 closed it. Prior to the steam ferry it cost 2p to be rowed across the river.

The Horseferry Public House was named the Unicorn prior to the appearance of the ferry. It changed its name in 1888. 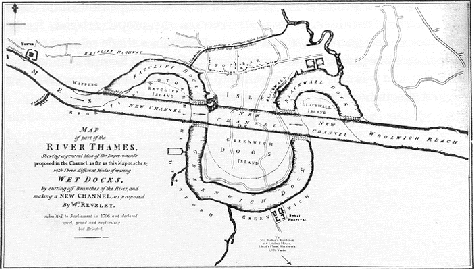 On July 27th 1872 a branch line opened from the Fenchurch St- Blackwall Railway to North Greenwich called the Millwall Extension Railway. This terminated just across the river from Greenwich in what is now known as Island Gardens.  (There had been a railway south of the river, in Greenwich since 1838).

The station was opened as “North Greenwich and Cubitt Town” this was later shortened to North Greenwich. Island Gardens was a landscaped pleasure gardens opened in 1895 by local MP, Will Crooks .

The Potters Ferry, originally ran from Ferry Rd to Billingsgate St, Greenwich. They leased their rights to the Great Eastern Railway. In 1874 the GER introduced a foot ferry using a small paddle steamer called the “Rifleman” .

This ferry ran from Johnson’s Public Draw Dock (Island Gardens)  to a point near where the Cutty Sark is now. Their ferry service was initially run by the Victoria Steamboat Association, later to become the Thames Steamboat Company. It ran every 20 minutes at a cost of 1d. 16,000 passengers a week used it. The ferry ran to 10pm at night. 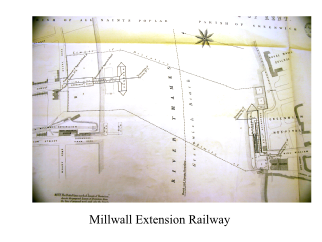 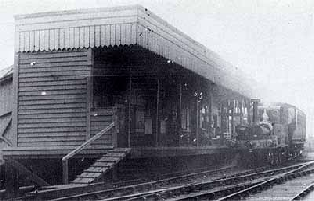 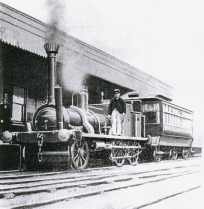 A view of North Greenwich Station soon after opening