THE INSTITUTION OF CIVIL ENGINEERS.

In olden times, when the Wapping district was submerged, and the river Thames between Ratcliff and Rotherhithe was broad and shallow, a ford existed there; but upon the Wapping marsh being reclaimed, the river deepened, fording became inconvenient, and the “ancient horse ferry,” referred to in the Thames Archway Company’s Act as occupying the site of their intended tunnel and as to which Lord Tavistock and others obtained an Act of Parliament in 1755, is supposed to have been established as a substitute for this more ancient causeway. This ferry was within a few hundred yards of the new ferry about to be described During the Roman occupation of Britain, a horse ferry existed between Dowgate and Southwark, and a similar ferry near where Lambeth Bridge has within late years been built. The former was on the main line of the Watling Street, and the latter on a loop diverging from the main road near Hampstead, and rejoining it at Newington Butts. The priory of St. Mary Overie (St. Mary of the Ferry) was founded by the daughter and heiress of a Dowgate ferryman. This ferry existed until the Priors built the first London Bridge. The Lambeth and Westminster ferry was used until the opening of Westminster Bridge, in 1750, at which time it was one of the most frequented passages over the Thames.

This ferry was from time immemorial the property of the Arch­bishops of Canterbury, who received £20 per annum rental there-from, and, with, the lessee, obtained compensation when the ferry was superseded by Westminster Bridge. The table of tolls varied, from 2s. 6d. for a laden wagon or coach and six, to 2d. for a man and horse, and much resembles the tariff adopted by the Thames Steam Ferry Company. There was for several centuries a horse ferry between Greenwich and the Isle of Dogs; hut this was used chiefly for cattle, and as Pepys records (August 1665) his having to stay on the “ Isle of Doggs ” two if not three hours to his great discontent waiting for the horse boat to float, it may be concluded that the boat was somewhat irregularly worked.

In 1821 The Poplar and Greenwich Ferry Company was incor­porated, to make and maintain roads between the then recently opened City canal and North Greenwich, and ferry-boats to convey cattle and vehicles between North and South Greenwich. The present important parish of Poplar was then but an outlying hamlet. The district was chiefly noted for the trees after which it was named, and for the excellence of its pasturage. The Poplar and Greenwich horse ferry ceased operations in 1840. The flat- bottomed rectangular boats, equal to the transport of a two-horse dray, or eight head of cattle, were propelled by oars, and received or landed their freights at the sloping foreshores of the river. These probably were representatives of the type of ferry-boats formerly used on the Thames, which until a few years since, could be seen near Greenwich pier awaiting the ship breakers. A small ferry-boat of this class is still employed to a limited extent between North and South Woolwich. Cattle and vehicles have for many years been taken across the river at Gravesend.

The Author knows of no record of the employment of a ferry­boat before the year 1023; but, cattle ferries were doubtless in use during previous ages, and they are now to be found in all parts of the world, much to the profit and convenience of most of the great communities which are divided by rivers or waterways. The astonishing exception is London, with nearly half its enormous population, all its docks, most of its heavy trade and commerce, east of the Monument. Until now it has been without any efficient means of conveying vehicles across the Thames below London Bridge. 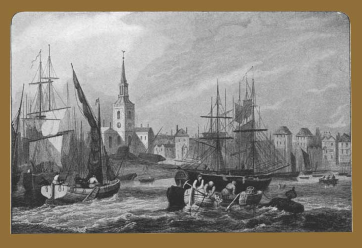