Steam Riverboat Services on the Thames

The years 1814 and 1815 saw one of the biggest changes in London river transport since the start of the wherries.....steam propulsion arrived. This was such a suc­cess in speeding up transport in London, and Londoners and visitors loved it.

But London was not the first City to see steam propulsion, the Clyde was famous for its steamboats and its steamboat builders.

With most forms of transport there were boom years and this was certainly true with the river boats. As London streets became clearer and safer and bus routes and underground railways grew and the tram came on the scene, passenger traffic on the river fell. But the river was not to be outdone and new schemes popped up on a regular basis during the next 100 years.

So here is the story of the Riverboats which sailed between Richmond and Wool­wich, together with the business wheeling and dealings, rows with the Councils, accidents and hopes and fears. 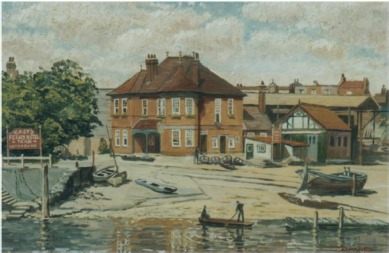 “For the introduction of steam navigation, the public are indebted, for the improvements, to the skill, spirit, and enterprise at Mr. George Dodd, who 1815, fitted up a vessel at Glasgow, and brought it to London by the power of steam machinery.”

What was the Thames Like before the advent of steam power in 1815?

The railways at this time were just steam engines hauling trucks at collieries. It was 10 years before the opening of the Stockton to Darlington Railway, fourteens years before Shillibeer was to run his first omnibus service in London and 21 years before London’s first railway, the London and Greenwich.

Prior to this, apart from the bridges most of which demanded a toll, and the odd horseferry, wherrymen were the sole source of crossing the Thames.

They were water taxis of their day which people could hail.

There were 3000 of these wherrymen in 1815 but number had nearly halved by 1854, some of them getting employment on the steam boats. The danger of this arrangement we will see later. (It was said that there was over 40,000 watermen were employed in the Reign of Queen Anne, twixt Windsor and Gravesend).

river like in 1815? In the 15 and 1600s Thames water’s purity was akin to Malvern Spring Water, apparently. But with the swelling population (it grew from 1 million to 2.3 million from 1810 to 1851) more and more household waste and sewage was being directed into the rivers that ran into the Thames, like the Wandle and Fleet. But water was still being extracted for drinking purposes as late as 1856 in Lambeth.

London suffered many Cholera epidemics because of this foul water. No wonder it was safer to drink beer or gin. The last Salmon was caught in the Thames in 1833.

Bazellgette’s interconnecting sewers, which although helped the drinking water situation, were directed into the Thames. This resulted in the Great Stink of 1858, and Parliamentary action to clean up the Thames.

So the paddle boats which sailed up and down the Thames were actually ploughing their way through a tidal cesspit, which stank appallingly.

But the river was the easiest and quickest way to travel East-West. Streets were narrow, crowded and unclean and indeed dangerous. The main throughfares were used for markets rather than passageways. So the river was London’s main highway. Indeed it was the Royal Highway with so many Palaces along it.

A Mr Laurence had brought a steamboat from Bristol in 1814 for trials, but little known about this, except for the extreme opposition he faced from the London Wherrymen.

It was not until 1815 that the first steam yacht was seen on the Thames.  This was the Richmond Packet, which plied between London and Richmond.  The vessel was fitted with the first marine engine Henry Maudslay ever made.

The steam yachts plied between Twickenham and the City, starting at 8am and arriving at 10 or 11am at a cost of 1/6d. (about £4 today).

In the summer of 1815, an entrepreneur, Mr. George Dodd, purchased and fitted up a vessel at Glasgow, and brought it to London by its own steam power in just over 5 days.

This 63 ft vessel was built in 1814 by Wm Denny of Dumbarton, and was formerly employed on the Firth of Forth. It was called the PS Margery. It was the first Thames steamer which was capable of long distances and began plying between Gravesend and London. At Gravesend passengers were transferred to the shore by rowing boat. The Margery lasted one year on the Thames.

This was followed by a boat called the “Thames”, which changed its name from the Argyll, and it came round from the Clyde, encountering rough seas, and making the voyage of 758 miles in five days and two hours.  This was thought extraordinarily rapid at the time.

By 1820 steamboats were commonplace. In the years 1820-24 a million passengers a year were being carried. (The population of London was just over one million).

The General Steam Navigation Company, one of the largest shipping companies in the UK, was formed in London in 1820 but was wisely careful not to venture into the Thames riverboat traffic. If it had it would no doubt have dominated the scene.

It was not until the 1830s that the east of London was properly served, the trip between Hungerford Market and Greenwich being an hourly service. 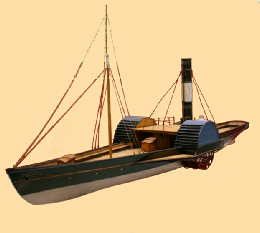 The "Greenwich" was built for the Greenwich Steam Packet Co., a boat of 96 tons gross, length 122ft by 15ft wide. Her engines were 40hp. She worked between Greenwich and London Bridge Wharf.

The Thames Steamboat Company owned the Locomotive and Cardinal Wolsey both built 1840 by Ditchburn & Mare with engines by Braitwaite & Milner with a high-pressure boiler. The steam was exhausted through the funnel making the noise of a railway locomotive. They worked between London, Richmond and Hamp­ton Court. The four main companies which ran river services were the London and Westminster, Iron Steamboat Co, Halfpenny Fare Steamers and Citizen Steamboat Co.

between the Old Swan Pier and South Westminster Bridge Pier in 1835. These were known as the flower boats. They were double enders with John Penn oscillating engines. The funnels were bell topped painted black with a white band. They had a top speed of 10.5 knots with 8ft diameter paddles.

The boats were named :-

They were built at Deptford and Blackwall.

The London Pride was later given 9ft 4ins feathered paddle wheels which increased her speed to 13 knots.

Iron Steamboat Company started up a service to Chelsea and Kew in 1838 charg­ing 2d or more according to distance. Their boats were built by Ditchburn and had Penn engines. They had all black funnels. They were built from 1838 to 1844 and were approximately 82ft long by 14ft wide and were mainly 24hp. They were named:-

The Daylight, built in 1838, was the first iron steamboat on the Thames. On 31st August 1859 the Bride fouled a sunken barge and sank, all the passengers were saved.

Halfpenny Steamers (Dyer's Hall Company) ran vessels from 1846 from Dyer's Hall Wharf, near London Bridge to the Adelphi Pier near Charing Cross. The com­pany attracted the working class by having low fares.

The boats were 15hp and were double ended with a rudder at each end (one lock-able in each direction). The oscillating compound engines were built by Joyce and Co. They were named:- Ant, Bee, Cricket and Fly.

The Cricket was unsuccessful and withdrawn being replaced by a new Cricket. At this time the railways mainly recruited from the army, because of its in-born disci­pline. In contrast to the railways, the steamboats were not run with the same disci­pline. The steamboats recruited from unemployed watermen. Instead of the wher­ries to row across the river they were put in charge large of mechanically driven boats driven by temperamental steam engines. 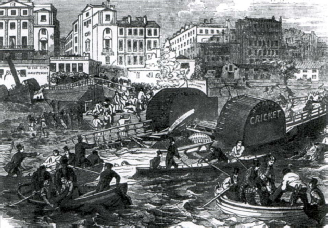 On the 27th August 1827 at 9-30am the boiler of the steam­boat Cricket blew up, 5 peo­ple killed and many injured. Other reports say that 17 were killed and 60 injured out of the 150 passengers. The ferry was at the Adelphi pier and about to leave for London Bridge. One part of the boiler was hurled 100 feet. The boats had low-pressure boilers and the company advertised the fact that they were safer.

However the unskilled boiler men tended to run them at a higher pressure of 36psi, to get better per­formance. The engineer had screwed down the valve because the boat was running sluggishly. He went off duty but forgot to tell his relief. These were unskilled men put in charge of lethal machines when not handled cor­rectly. The  Cricket was re­placed by a new boat "Sunshine".

Margery, the first steamboat on the Thames 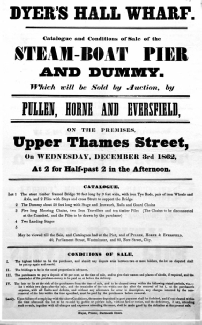 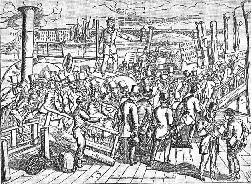 Crowding was a problem during rush hours

Notice to sell the Dyer’s Hall Wharf and pier in 1862 “to the highest bidder”.