Propulsion and steering is controlled from any of three consoles spread across the ships bridge, which is positioned amidships.

No more telegraph or whistles in the brass tubes.

This revolutionary form of power and steerage allowed the ships to approach the terminals head on, spin on the spot and move sideways. They were extremely dexterous.

It was not until 1982 that New York finally got rid of their Staten Island steam ferries and replaced them by diesels with this type of propulsion. The Thames beating them by nearly 20 years.

Like the previous paddle steamers the diesel boats spend 8 months on duty and 4 months on maintenance. A two boat service is provided except Saturdays and Sundays, when one boat suffice. They have a crew of 8 and have a class V certificate to carry 310 passengers.

The three new boats were built by Caleden Shipbuilding Engineering of Dundee and travelled down to Woolwich under their own power. They were called James Newman, John Burns and Ernest Bevin. 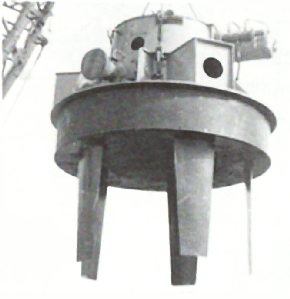 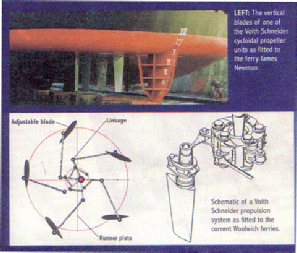 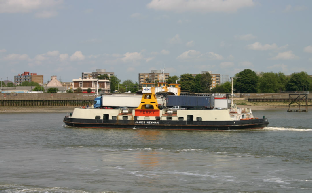 James Newman was a school teacher by profession, he was mayor of Woolwich from 1923-25 and again in 1952. He was a member of the Woolwich Borough Council for many years and was decorated with the OBE in 1948, in recognition of his service to local government.

The son of an agricultural labourer, he worked as a farm hand and truck driver before his keenness in trade union matters led to his becoming a union official in Bristol in 1911.

By 1920 he had become established as the "Dockers K.C. " by successfully pleading their case before a wages tribunal.

Fittingly, many of the passengers of the Ernest Bevin were dock workers travelling to work across the Thames.

In 1921 Ernest Bevin formed the Transport and General Workers Union, out of 32 separate unions. In 1945 he became Foreign Secretary and in 1950  represented Woolwich, the home of the ferry, until ill health forced him to retire in 1951.

On 28 December 1981 one of its engines blew up when water leaked into a cylinder during the Christmas shut down. This caused the engine block to split. A few days later on January 10th the crank shaft on John Burns failed, leaving James Newman to carry the load single handed. Because of a rail strike at this time, road usage increased and the situation at the ferry terminals became chaos.

In 1989 poor Ernest Bevin was again in the news when he hit the buffers on the south shore too hard. The ferry was closed for 2 weeks for repairs. 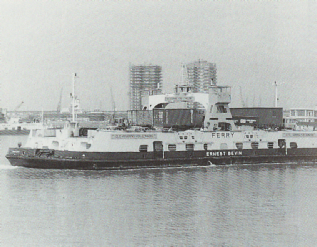 On the 20th November 1965 Dame Florence Bevin unveiled a plaque on the boat that carried her husband’s name. She was ill when the boat was launched so could not attend the naming ceremony in Dundee. 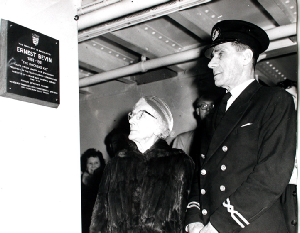 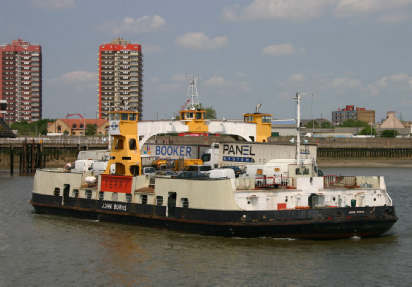 John Burns. John Elliot Burns (1858 -1943) was an enthusiastic student of London’s history and its river. He was the person who referred to the Thames as “Liquid History”. He led the great dock strike of 1889 and was the first artisan to reach cabinet rank.

John Burns is the flag ship of the fleet and took a demonstration trip up the Thames to Tower Bridge on 19th April 1963. 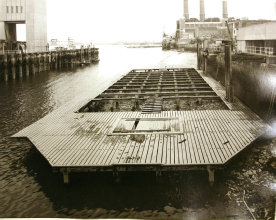 Black and white photograph of the new maintenance grid.

For the new diesel ferries it was rebuilt on the south shore. 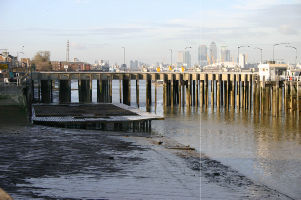 The structure and supports of the south side approach at low tide. This also shows the maintenance grid.

Because the James Newman had been sent to a repair yard after a fire due to vandalism the deck was unusually unoccupied. 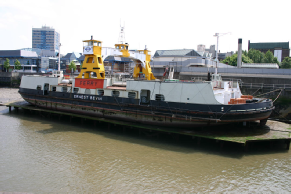 Ernest Bevin sits on the maintenance deck on the south side of the river. Like the one on the North side for the steam ferries, it enabled work to be done at low tide

The Woolwich Ferry carried slightly over one million vehicles in 1996/97 and about 2.5 million passengers.

There are imbalances between the North and South Terminals in traffic flow.

The southbound flow averages with 2000  vehicles a day and the northbound 1,500 vehicles/day.

Cars provide most of the traffic at rush hour peaks with goods traffic steady all day.

There are more HGVs travelling from the South Terminal because of height restrictions on the northbound Blackwall Tunnel.

For cars, the average transit time in the most favourable conditions with little or no queuing would be 11 minutes with two vessels operating and 15 minutes with one vessel. It rises to 25 to 35 minutes during the rush

For goods vehicles, the average transit time was 51 minutes (South Terminal) and 28 minutes (North Terminal) during weekdays. On the southside, it is common to find queues of goods vehicles right through the day. Demand is close to capacity much of the time, so the service can be quickly overwhelmed. Thus, with one vessel working and also when an accident occurred in the Blackwall Tunnel transit times can rise to one hour for cars and two hours for goods vehicles.

The ferry cost £5 million a year to run, a subsidy of £4 per vehicle

The ferry had only had 4 major closures in its history

1989. 2 weeks when Ernest Bevin struck the south terminal, the buffers had to be replaced.