Transport for London decided to replace the existing ferries, which were over 55 years old and replace them with two bigger, more efficient, boats. During the change-over period it was decided to the close the facility for three months and up upgrade and modernise the landing facilities.

From January 2019 two new boats replaced the three diesel ferries, Ernest Bevin, John Burns and James Newman which had been in continuous use since 1963.

TFL gave the building contract for the new ferries to Remontowa, a Polish shipyard in Gdansk, at a cost of £20 million per vessel. The ferries were designed by LMG Marin of Norway, technically supported by Briggs Marine Contractors, who operate the ferry service.

They are named after Vera Lynn, a 1940s singer, born in East London, and the other, more poignantly, after Ben Wollacott, a 19-year-old deckhand from Swanley who drowned in 2011 while preparing one of the ferries for service.

Before piling works for the new berths could begin, a survey of the riverbed was made and eight potential sites were identified which could have contained unexploded World War II bombs. No unexploded bombs were found . In June and July 2018, new restraint piles were built behind the existing berthing in preparation for the final phase of works.

According to TFL: "The new boats have two diesel generators and a large battery to provide electrical power to four thruster propellers, a design that maximises reliability and minimises emissions and will ensure a reliable river crossing in East London for many years to come. The two diesel generators have been fitted with Diesel Particulate Filters and Selective Catalytic Reduction systems to further reduce their particulate emissions by 90% and NOx emissions by 70%"

They will carry 150 passengers and about 45 vehicles, and will feature a hybrid diesel-electric propulsion system. The lithium-ion battery pack will allow for significant fuel savings by optimizing the fuel consumption, allowing one engine to run at constant load charging the batteries when not powering the propulsion.

The ferries will berth using magnetic technology, making them more stable to board and alight, and meaning that the engine thrusters will not have to be used to keep the ferries stable against the landing stages as with the diesel boats.

A new Woolwich Ferry office has already been built at Woolwich pier as part of the improvement programme. It offers a more convenient office location for staff and better visibility of the service to help monitor the operation.

On the 5th October 2018 Ernest Bevin made his last trip across the Thames before going for scrap, John Burns had left on 2nd October for a recycling facility in Le Havre, France. 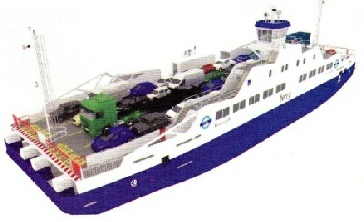 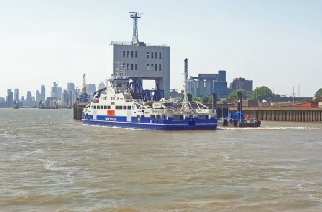 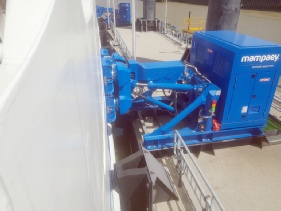 The magnetic mechanism that holds the boats in place 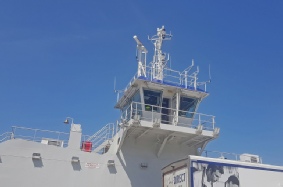