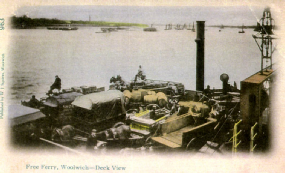 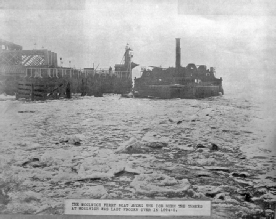 Another view of the vehicle deck

The 1895 big freeze on the Thames did not stop the ferry but certainly slowed down the service. 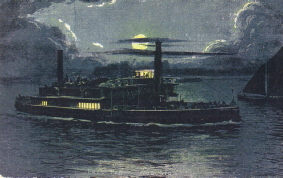 From 1899 the ferries operated all night due to demands from the dockers and shift workers. All the ferries were fitted with electric light, a novelty at the time. The ferries had independent paddles from their own engines making them very manoeuvrable. They had a nine-minute frequency. Communication with other boats was by steam whistle and to the engine room by telegraphs, one apparently for each paddle. Since the start ferries are obliged to give way to traffic up and down the river and ducked and dived their way through passing traffic. The early ferries of the day saw dockers and factory workers, followed by office staff, then shoppers for the market in Woolwich.

The GER introduced another boat in 1891 to compete for passenger traffic with the free ferry. It was called “Woolwich” and had enclosed comfortable cabins. Built by the Thames Ironworks with steel hull it was 148 tones. In September 1908 the Great Eastern Railway abandoned its ferries and she was sold to a Captain TS Wilson and converted to a vehicle ferry for the Queensferry passage across the Firth of Forth, until scrapped in 1923. The Great Eastern had originally accepted £27,500 from the LCC in compensation for loss of trade. 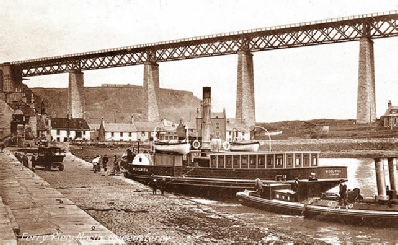 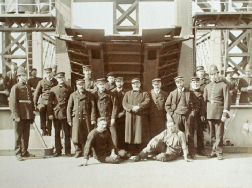 The crew consisted of 3 engineers, 2 firemen and a greaser, 4 deckhands and a deck cabin boy. There was 2 policemen who had the ferry as a part of their beat.

The LCC employed the crew on monthly contracts 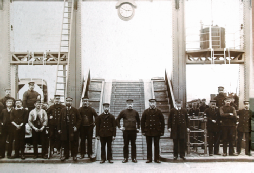 Uniforms consisted of coat, hat, vest, trousers, oilskins and pullovers similar to the sludge boat crew but marked Woolwich Ferry. The officers would appoint the rest of the crew. 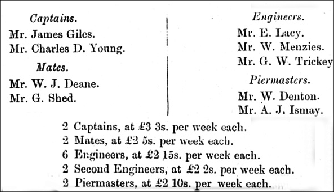 The crew members and their salaries

To provide vehicle access little change was needed to the environment on the north side of the river, but on the south side, some of the most notorious slums and lodging houses were demolished in an area known as the “Dusthole”.

Hog Lane and Surgeon Street were knocked together to form the original access road.

Construction of the south pontoon 1889. just prior to the opening of the ferry. 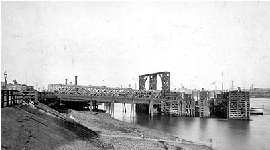 The Approaches and pontoons 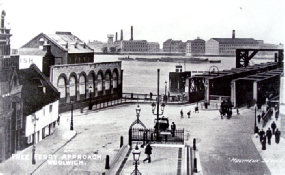 View of the south side  pontoon

Views of the North pontoon 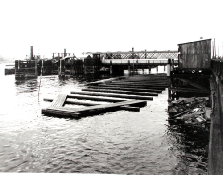 A view of the maintenance grid on the northern shore.

Working the hydraulic levers on the northern pontoon.