When World War 11 broke out all the plans for upgrading the ferries were shelved.

During the World War two the ferries often did 24hr service. Contrary to popular belief they did not go to Dunkirk, although one was prepared for the journey.

During the massive dock raids on September 7th 1940 the ferries evacuated residents and workers from Silvertown, “across a river burning with oil”.

The ferries ran through the war with no lights and the wheelhouses were shielded by concrete to protect against shrapnel. Whilst no ferry was actually hit, one had a near miss with a V1 skirting across the vehicle deck and into the mud bank.

The effect of the bombing during the Second World War meant that meant factories and offices were relocated. Also the tram and bus services were severely curtailed by the bomb damage.

The Government requested that a river service be set up between Westminster and North Woolwich. The vessels mainly came from West London operators.

The service was sporadic and slow and unreliable. It took 80 minutes for the journey. The service only ran from Sept 1st to Nov 2nd 1940.

The boats did not call at Woolwich and workmen had to walk through the tunnel or catch the ferry. If there was a threat of an air raid the ferry stopped running and the tunnel closed. On many occasions the workmen were stranded at North Woolwich. 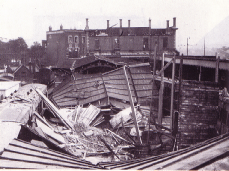 The devastation caused by a direct hit on North Woolwich station. 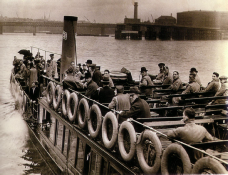 A boat on the wartime river service 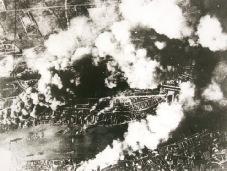 View of the vehicle deck, possibly a war time shot as the military car has a white band.

Two loads of cement cross the river. Note the way the ferries were regimentally loaded.

The paddle steamers had to be carefully loaded to give a balanced boat. A lop-sided boat would have one paddle splashing about half out of the water. Note the army lorry with gun in tow in the photograph on the right.

Vehicles carrying explosives or bulk petrol crossed the river in solitude. In this case the ferry carried a warning flag. Today risky loads travel via the Dartford Tunnel or one of the London bridges

Traffic coming off the ferry in 1949 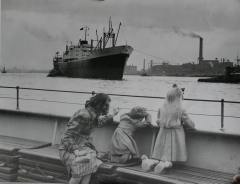 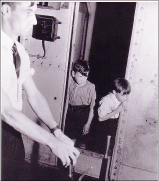 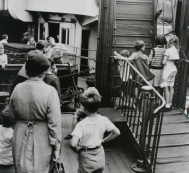 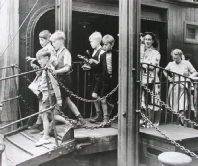 Mothers and Kids on the Ferry

The ferry has always attracted sightseers and been a fascination for kids. It was often believed that the kids thought the ferry was run just for them, spending all day chasing around watching the river traffic and avoiding the constable. To them it was their pirate ship, their Spanish Gallion. They often sneaked in to the engine room too. The ferry was also a haunt for artists who painted the river scenes.

Kids from North Woolwich used the ferry to go to school in Woolwich. In hard times it was commonplace for the elderly or mothers to take their sick children on the ferries, to ride all day in the warmth. Half an hour on board was a well know cure for Whooping Cough. (was it a mixture of coke fumes and oil?) The crews knew of this and turned a blind eye. In fact so many people were said to travel on the ferry for their health that there was a proposal to put deck chairs on board.

It was commonplace was for passengers to be sea sick on the 7 minute journey. During the previous centuries the air around the area used to be cursed with the Plumstead Argue.

Families took picnics on board and spent an afternoon observing the passage of passenger and cargo vessels on the Thames.

The ferries were not only the place to enjoy life, but also to end it; suicides were common, presumably because there were no bridges near. One of the last was in 1958 when a man jumped into the Thames, just turning to his fellow passengers shouting “goodbye”.

A Keystone press agency release said that the ferry was used by the kids as a holiday, as it was the closest they had ever come to the sea. “They close their eyes and enjoy the salty tang coming upon the breeze from the distant sea”.

However it goes on to say that one advantage of the kids is that there would always be a potential supply of ferry captains. 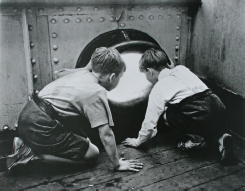 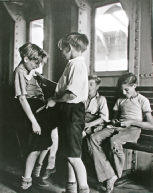 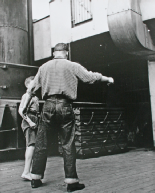 The crew generally ignored well behaved children But naughty children …………were shown the red card and chucked off.

One ferry is reported to have broke her moorings in thick fog and drifted away to Woolwich Reach and the crew and passengers had to spend all night on board. When this happened and to what boat is unknown. It was a note in the London Borough of Greenwich chief engineers report of 1963.

As early as 1950 the LCC had wanted to replace the ferries but was unable to reach a decision on just what would replace them. It had been suggested that with the opening of the new bore of the Blackwall tunnel in 1967 there would be no need for the ferry. During their life the ferries clocked up 4 million miles carrying 180 million passengers and 55 million vehicles. As loadings grew the ferries were unable to cope with demand, lorries often being left behind at each sailing

Although it is said that no bus service ever used the ferry this was not correct. The London River Service used the ferry. Here are three views of a London Transport RF on the tour.

The trips ran in the summer of 1951 to 1954, varying from a plain London River Tour to a London River and East End Tour and even a London River and Docks Tour. For two years it ran twice daily, afternoon and evening, but never on a Sunday. The exact route was never recorded by the London Transport Museum.

picture from the Ken Glazier collection 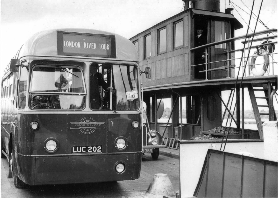