Eventually, in 1963, three new revolutionary boats took over. It was decided that the new boats should be end loading, roll on roll off. To facilitate this, two new pontoons had to be built with new approach roads. In the 1960s the construction of new landing piers again meant little disruption for the north side. 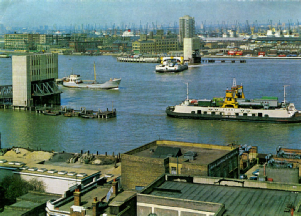 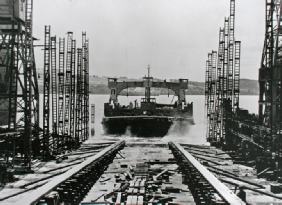 Here one of the new boats, the James Newman, is launched at the Caleden Shipbuilding Engineering yard in Dundee 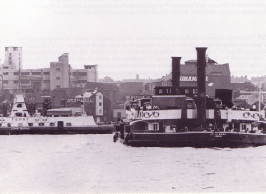 This 1963 photograph shows the transition period between old and new. The old ferries carried the vehicles across the deck, side loaded, as did the new ones until the new loading ramps were ready.

There may have been little disruption on the north side but on the south the 18th century Enon Baptist in the High Street had to be demolished, as did an ancient right of way “Forty Corners” round the side of the riverside 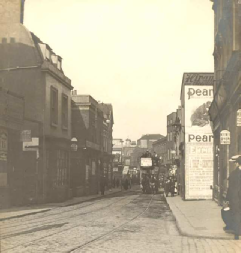 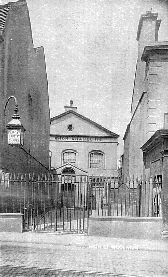 The buildings on the left have all been demolished including the fine Enon Baptist Chapel which was set back from the road and cannot be seen in this photograph. Its sign, however, can be glimpsed.

Some of the buildings on the right hand side survive 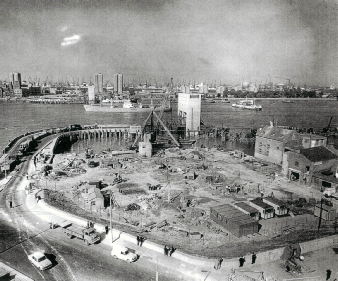 The hoist towers, or piers, support hinged ramps and were designed by Husband and Co. They have to be flexible enough to deal with the fluctuations in the Thames tide. The new boats are able to hold themselves in place with engine power and are not roped up like the paddle steamers. The new diesel boats originally worked from the old pontoons, side loaded, until, on 20th September 1966 the new terminals were completed and the old pontoons were abandoned. 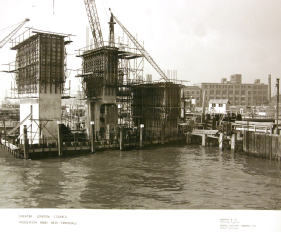 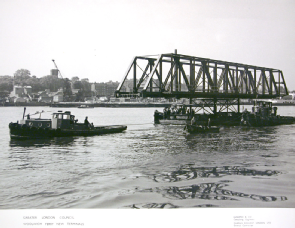 The picture shows the North side tower under construction

A pontoon being delivered by river barge 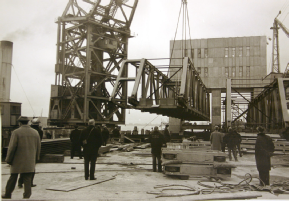 This shows the new landing stages being put in place. The holding hoist is in position in the tower and the ramp as edged onto it. The crane used is the river crane, the Mammoth. 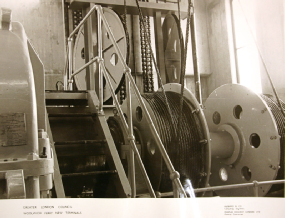 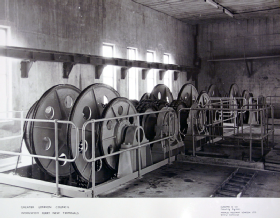 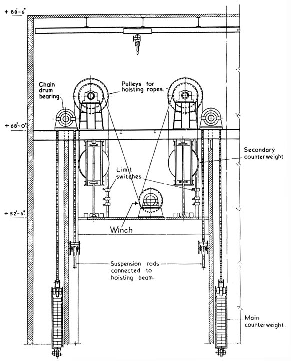 A view of the hoist gear and counterweights in the hoist towers.

GLC photograph of the winding gear

Here is a sketch of the counterweight mechanism for the pontoons.

They are designed to raise a total of 30 feet, and raise 17ft above mean sea level which will allow for additional flood protection. (Newlyn Datum) 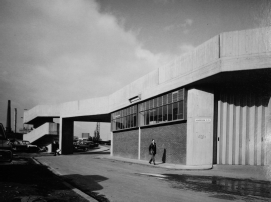 New buildings were built in Woolwich for the maintenance workshops. 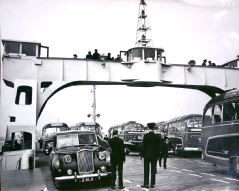 John Burns took a demonstration trip to Tower Bridge on the 19th April 1963. Note the boat deck is marked for end loading. 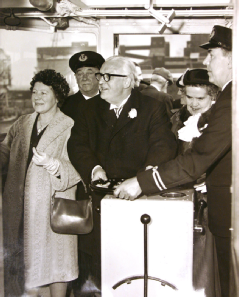 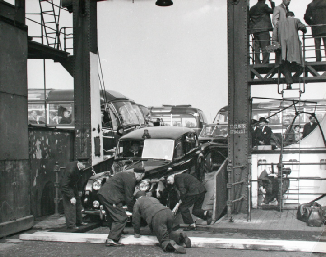 Woops. The mayoral car gets stuck as it alights. 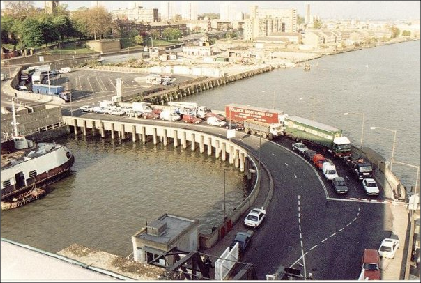 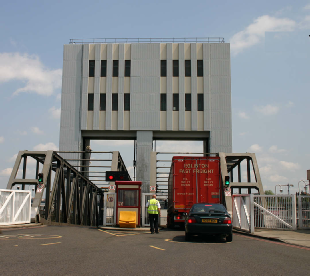 Looking down from the south tower. The park on the right is used for waiting vehicles in the rush hour, to ease congestion at the roundabout in Woolwich.